Why I changed my mind about church planting

Not long ago I spoke at the Sticks Conference in South Carolina. I had a great time hanging out with men like Artie Davis, Pete Wilson, Scott Williams, Dave Anderson, and Charles Hill, just to name a few. In addition to having amazing conversations with these guys, I also walked away with something else...a new vision about church planting.

One night my wife and I were sitting in Artie's living room listening to him share his heart about reaching smaller towns. At first, I thought, "Why would anyone want to plant in smaller towns?" I mean, the people and resources are in the big cities and heavily populated areas; it would be nuts to plant in tiny towns in the middle of nowhere...or would it? My staff and I had originally planned on planting in Elizabethtown, KY, where there is a large population and an army base (Fort Knox). However, since my conversations with Artie, the Lord has been messing with my heart.

Elizabethtown, and towns like them have enough "urbaneness" and population to attract post-modern church plants; matter of fact, I know of three strong churches in Elizibethtown that are simular to ours and are doing amazing things for the Kingdom. Yet that is not the case in the smaller towns; you seldom hear church planters wanting to start a church in these "middle of nowhere" communities. These small towns scattered throughout rural America have populations less than two or three thousand people, but will have at least twenty church buildings standing throughout their community and county. In most cases, they are cookie cutter churches; very traditional, very old fashioned, and in many cases, very dead. Many churches in the rural Bible belt are very missional in fire and brimstone evangelism, but lack in attractionalism and discipleship. Their church models all mirror each other and unfortunately rejects anything that looks post-modern; their idea of outreach is to push a denominational religion about Jesus instead of a relationship with Jesus.

Of course, I am aware that church plants in rural areas may never see over 500 people, but here's what the Lord dropped on me; "Are you wanting bodies in seats or souls in heaven? Are you wanting the spotlight of the city or to be a light in some of the darkest, most ignored places in America?" By planting in small towns (where there are no contemporary church models) we can reach a younger generation that hates church. Being from a small town myself, I totally understand why the younger generation hates church...it was the same reason I hated church as a teenager... IT SUCKED! Don't get me wrong, there are some GREAT churches throughout rural America, but then again, there's a lot that aren't so great.

What will this look like? I can tell you...it'll be a fight. Most small town churches will not welcome post-modern church plants. Satan will pull out every gun he has...because he knows that we are carrying a very contagious gospel message that can turn small towns upside down.

Building an Invite Culture in your Church 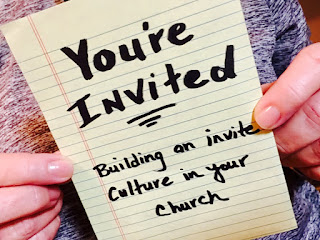 Growing a church isn't easy. It takes dedication, hard work and good planning. Even though there are tons of books and blogs out there about it, many  churches  still struggle in  attracting new people.  Despite the latest greatest growth strategies, friends inviting friends is still the most effective way to bring new people to church. When people become intentional about bringing their unchurched friends to church, they get to witness life change up close and personal...and when that happens, the church moves into a culture of invite.  Here’s three things to help build an invite culture in your church:  Design a gospel-centered invite culture Determine  your invite platforms Develop  people to be path leaders  Creating the Design  A healthy invite culture must be designed around the why more than the what . When we focus on the  why , it removes us from the what and automatically answers the who ,  because  the why is always about people who aren'
Read more